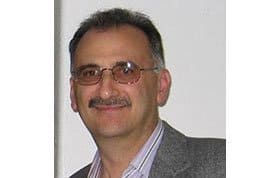 Andreas also teaches a popular freshman seminar at UC Davis every quarter, entitled, “Success in College and After College: How to Get and Stay on Course”. His scientific interests are in green chemistry, better teaching methods, and chemistry book writing and reviewing. His lectures are tuned toward conceptual learning via the Socratic dialogue method.

Born on the beautiful island of Crete in Rethymno, Greece, Andreas Toupadakis received his primary education while living in the mountainous village of Argiroupoli near the coast. After receiving his B.S. in Chemistry from the Aristotelian University in Thessaloniki, he began graduate school in the U.S. He has lived in the U.S. since 1978, and he received his Ph.D. degree in Chemistry from the University of Michigan in 1990.

He has taught at several colleges and universities in the USA and in Greece. His scientific interests are in better teaching methods, education reform and self-awareness for inner growth. His lectures are tuned towards conceptual learning via the Socratic dialogue method. He has given lectures and written articles on life planning through wise career choice, on career change and career satisfaction, and on sustainable living on his campus, across U.S. campuses, in Greece and in Japan.
His personal web site http://thelifecurve.com is devoted to student success in college and after college.
Every day he spends many hours with his students at his office providing vocational guidance, and also some weekends at his organic garden plot provided by the Experimental College.
Andreas Toupadakis is also the author of three chemistry readers, CHEMISTRY READER 2A, 2B, and 2C, which have been received with great enthusiasm by students taking the CHEMISTRY 2ABC series, teaching assistants and his colleagues.